The first single from my newest release LOVEISALOVE is now available for download and streaming! 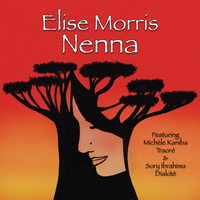 Click the image to hear a preview of NENNA

NENNA, featuring the astonishing vocals of Michèle Kaniba Traoré and Sory Ibrahima Diakité is available all over the world!

And thank you to all who signed up for an early copy - it was so helpful and appreciated! Don't miss the opportunity for the next single, coming out in just a couple of weeks!

Long ago in a faraway land… or in this case, 2008 in Mali… I wrote a dance score for Swiss choreographer Gabi Glinz which we performed in both Bamako, Mali and Ouagadougou, Burkina Faso.  While in Bamako we were invited by the French Institute of Mali http://www.institutfrancaismali.org/ to conduct two workshops with local musicians and dancers.

The evening I arrived, even before the workshop began, I met up with singer/songwriter Foulaké Sory Ibrahima Diakité and we came up with the basic song of "Nenna." Since language was not going to be the best way to communicate, I sat down and wrote the bass line and string part for the song on my laptop & portable keyboard and played it for Sory. He listened to it once and immediately knew what he wanted to do. He said he was going to sing to his mother, asking her to tell him things of the world, teach him.  I simply hit record, and he sang the powerful opening verse to “Nenna” in one take. The next day Michele Kaniba Traoré joined us and our trio was complete. She was just as quick and inventive as she sang along to our new track. “Nenna” means “Mother” in Bambara, their native language.

This year, as I was readying the tracks for the LOVEISALOVE album, I shockingly discovered that all the original recordings of that first performance had been digitally corrupted over time. But I did have an mp3 demo, so the magic of the moment wasn’t totally lost.  Incredibly, I was able to locate both Sory and Michèle, and sent them the mp3s to remind them of the music we had created so many years ago. They graciously re-sang their vocals and sent me their new audio tracks. Michèle and I both wrote and sang new verses, and the song grew even deeper and richer than that first recording. This has been a journey of love.

With the addition of guitarist Frank Burrows and drummer Warren Odze, “Nenna” in its final version pours over the soul with its beauty.

Dancin' With The Boys Album

Check out my first album, available for purchase either digitally or on CD!

Dancin' With The Boys

A World Album, featuring artists from Mali and the Ivory Coast!

Following the release of the first single, NENNA, And ready to be released in its entirety this holiday season, LOVEISALOVE is a celebration of world cultures, mixing African sensibilities and Elise's jazz influences, sung almost entirely in Bambara and Pulaar, written during a concert tour of Mali, and finally ready for release! Featuring the vocal talents of Alou Sam, Michèle Kaniba Traoré and Sory Ibrahima Diakité. Sign up below to be the first to gain access to singles and more!

"JAZZBO" is the crossover invention of Elise Morris who writes songs based in Jazz, Theatrical, Rock, Blues, Classical, World, Experimental, Folk... well, you get the picture. All from the Head, Hand and Heart.